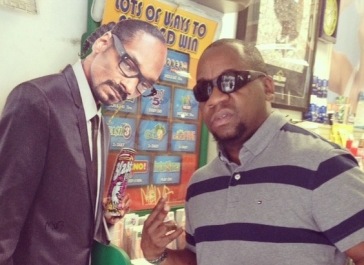 Who is the coolest rapper of all time? LL Cool J? Perhaps. Big Daddy Kane? I can’t argue there. JayZ? He’d certainly garner a lotta consideration. My choice would unequivocally go to Mr. Calvin Broadus aka Snoop Dogg. To me, it’s a no brainer. I suspect legions of fans across the planet would agree.

Twenty-two years ago, Snoop began terrorizing the music scene. He was initially featured on producer/emcee extraordinaire Dr. Dre’s first post-N.W.A. single “Deep Cover”. Doggy Dogg’s voice was ultra smooth, his delivery was relaxed yet cold blooded and his lyrics were as G as could be. This 20 year old was not intimidated by the big stage. He was just getting started.

In late 1992, Dr. Dre released his debut album, “The Chronic” to alarming critical and popular response. Snoop was prominently featured on the album, specifically on the huuuuuuuge singles “Nuttin but a G Thang” and “Dre Day”. Almost overnight, he was not only a household name, but a superstar that had already transcended rap music. Along with Dre, he graced the cover of RollingStone! He didn’t even have his own album out yet but still, the world loooooves Snoop…

In November 1993, one day before this writer’s 21st birthday, Snoop released his debut album “Doggy Style,” produced entirely by Dre. While “The Chronic” was more confrontational, the vibe of “Doggy Style” was more festive, a victory lap if you will. Initially I preferred “The Chronic”. The years, however, have treated “Doggy Style” better. Electric singles such as “Gin & Juice,” “What’s My Name” and “Doggy Dogg World” are the reasons why. Snoop has since made some really good albums, but none approaching this masterpiece. Still, the world looooooves Snoop…

Eleven solo albums, thousands of collaborations, a slew of movie appearances, reality shows and even a foray into reggae, Snoop Dogg is still very relevant today. He’s a media tycoon, hosting his own popular internet talk show and often appearing on various ESPN outlets. He’s a featured artist on (in my opinion) the best hip-hop album this year, Statik Selektah’s monstrous “#whatgoesaround”. He’s an extremely “active” advocate of the legalization of marijuana in America. He’s funny. He’s approachable. He’s shockingly interactive with his mammoth fanbase. Some may say too active due to his high usage of Instagram.

I believe the reason we still adore this man, this artist after 22 years, is his ability to roll with the times but still stay true to himself. He coaches inner city kids on the football field. His revealed candor about his missteps as a father and husband appeal to us as none of us are perfect. We see a part of ourselves in Snoop Dogg or maybe someone we are close to. Not to mention two decades later he’s still an absolute beast on dat derr microphone. The greatest emcee of all time? Maybe, maybe not. The king of the West coast? 2pac and Ice Cube fans would say hell no. Still, we looooove Snoop…

The views represented by bloggers on this site do not necessarily represent the views of Hip-Hop 101, its management, employees, advertisers or any associated parties.

You can be the first one to leave a comment.

This site uses Akismet to reduce spam. Learn how your comment data is processed.

In January of 2012, Hip-Hop 101 launched a weekly internet radio show on www.nexradioonline.com entitled Hip-Hop 101: The Mix Show. The show features DJ Mike Swift spinning classic hip-hop music in addition to featured hip-hop news and flashbacks to the “what’s happenings” of the founding fathers and mothers of hip-hop. Tune in every Tuesday at 7pm EST for a fresh music mix, a look back at what was hot in rap music on the Billboard music charts from days gone by, the latest music from classic artists and historical tidbits and facts.